The legend of Antello and Althea The city’s origins are lost in legend. An ancient story would set them back to Antello, a Trojan hero who escaped with Aeneas after the destruction of the city. While Aeneas had continued his travels to Lazio, Antello would have stopped here, giving rise to the city of Altilia (Alter Ilium – another Troy). Another legend says instead that the city was founded by Althea, already Queen of the Myrmidons and arrived here after fleeing from his subjects, because of the murder of his son Melegrano. The founders and the walls Actually, the area on which stands the current Altamura was inhabited since ancient times, as demonstrated by the discovery of the Man of Altamura and by more later evidence like the “The Cross” settlement and the necropolis dating to the Bronze Age. The Peucetii, first civilization to settle on this land, built a great civil and military work that later gave its name to the new country: a high wall around the village (high – walls = alta – mura), made of boulders, the Megalithic Walls, to defend it against enemies coming from the sea (Taranto) and from the mountains (Lucania), at the end of the fifth century BC. In Roman times, the city experienced a substantial decline, probably due to the destruction by a cataclysm or to Saracen raids. Federicus me reparavit It was only in the Middle Ages that the city regained some importance, thanks to the Emperor Frederick II of Swabia, who, come to Altamura in the twelfth century, found a deserted and uninhabited place. The city was reborn through his dedication (as confirmed by the inscription under the red and white coat of arms of the city: Federicus me reparavit), with military and economic targets, well defended by a castle and a new town wall. The emperor did this, according to an ancient story, perhaps in gratitude for the help his sick soldiers had received while he went on the crusade to the Holy Land or perhaps, according to others, because of the healthy position. The free city revives To populate it he called people from neighboring countries too, including Greeks and Jews of the areas of his kingdom, granting exemptions and special privileges, or the right to cultivate the land and rebuild their homes without paying taxes. When the city revived, the villages scattered in the countryside, where people had taken refuge in the dark ages of the history of Altamura, were slowly emptied. So the city grew and grew rich in a short time, and in the ’400 it already counted a few thousands of inhabitants. Frederick II ordered the construction of the great Cathedral in 1232, destined to become one of the most revered shrines in Apulia. In 1248, under pressure from Frederick, Pope Innocent IV declared Altamura outside the jurisdiction of the bishop of Bari, making the Cathedral a de facto “palatine church”, equivalent to a palace chapel. The Lioness of Apulia The territory of Altamura was a fief of various noble families, in particular of the Orisini del Balzo and the Farneses (1538-1734), the latter ordering the construction of numerous palaces and churches. In 1648 the insurrection of Masaniello in Naples involved many other cities of the kingdom in revolt against the feudal system, including Altamura, which opposed with decision the reconquest attempts by Gian Girolamo II Acquaviva d’Aragona, powerful Count of Conversano. On that occasion, Altamura joined the Royal Neapolitan Republic and self-governed itself.In 1748, Charles VII of Naples founded there a university, one of the first of its kind in all of southern Italy. In 1799 the city rebelled against the Bourbon government: the revolt, known as the Revolution of Altamura, was ultimately suppressed two days later and the city sacked by Fabrizio Ruffo. In the Napoleonic age instead the university was finally closed (1811). The revolutionary spirit was also felt in the Risorgimento, making Altamura the seat of the Bari Insurrection Committee and, after the unification of 1860, it was the site of the first provisional capital of Apulia; it has since then been called the “Lioness of Apulia” for the bravery shown during the rebellion against the Bourbons. 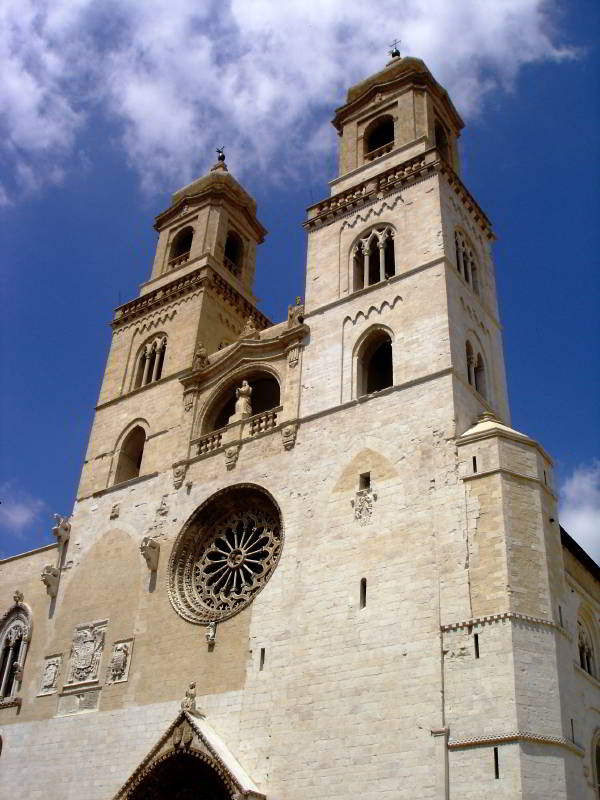 The hamlet and its domina The most beautiful part of Altamura is the medieval town and its palatine cathedral, the only temple erected by Frederick in 1232, the great builder of castles. The true religious, civic and historic symbol of the city is the Cathedral, dedicated to the Assumption. Much of the original church collapsed under the 1316 earthquake and was rebuilt during the reign of Robert of Anjou. The children of a certain master of Bitonto Council worked there, whose signature reads up on the Angevin Port, also known as Port of the Spices because it opened on the market place. To whom goes through this portal, the inscription on the groin archivolt seems to say: “Royal Chapel I am, do not try to fight me. I, King Robert, protected by the King of heavens, protect it. Gate of Heaven, I am.” The inversion The cathedral underwent several expansions in 1534 when its orientation was inverted: where there was the apse, was built the facade, and where there was the facade it was extended with the presbytery and the choir. After a few years, but no later than 1557, the two mighty bell towers were built. The Emperor is Charles V, whose great coat of arms is clearly visible. The upper parts, the baroque cusps of the bell towers, were added in 1729. The entire structure finds its point of balance and symmetry in the beautiful rose window, a masterpiece of Apulian sculpture of ‘300, from the central eye of which seems to radiate 15 columns linked by spoked-ring arches. 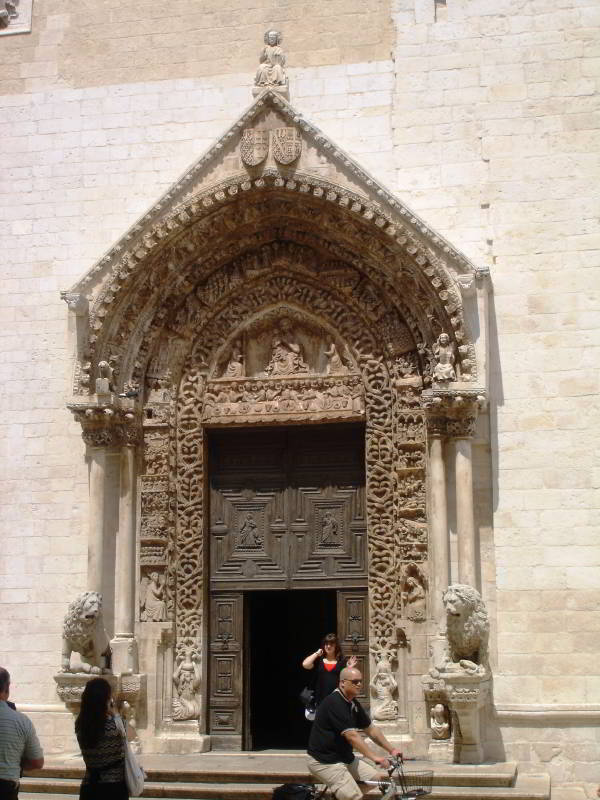 The triumph of decorations It is however the portal, Gothic and perhaps built in the early 1400′s, to let us astonished: it is a whole triumph of decorations and sculptures, in a protruding porch, resting on two fierce lions, rebuilt in 1533, almost guarding to the door of the Cathedral. On the arches of the door are sculpted 22 carved scenes, among the most significant in the life of Jesus. In the center, in the lunette, there is the Madonna Enthroned with the Child between two angels, and at the bottom, on the lintel is depicted the Last Supper with Christ on the left side receiving the kiss of Judas. They are true masterpieces of medieval sculpture, gothic Apulian art. The legendary interior Its plant is that of a Basilica with three wide naves with columns and pillars, with beautiful capitals, almost certainly Swabian. The restoration and the latest renovations, which took place around 1850, through the work of Msgr. Falconi, have redefined the image of the church. Even the monumental organ dates back to thiese years, built by masters of Turin: for quality, richness and grandeur of sounds it is among the most complete organs of Apulia: it has 29 barrels and its registers can play an entire orchestra. An artistically carved wooden choir and numerous paintings of the Neapolitan school enrich the Cathedral. Other works, even older, gracefully and tastefully decorate the church. First of all, the elegant pulpit in carved stone, of about 1545, and then, about 1587, there is the nativity scene in stone depicting St. Joseph, Mary and the Baby Jesus, with the other characters of the Christmas tradition inside a natural cave, and outside the Magi and the shepherds. Author of the sculptures was the artist Altobello Persio. It is said that Frederick II had a treasure hidden in a column of the cathedral: the treasure would have came to light only when the cathedral had collapsed and would have served to rebuild it. Sources: Valentina Solimene  – medioevo.com wikipedia