The walled-in inscription A walled-in inscription in the courtyard of the Castle tells us that its construction began in 1233, when the earlier buildings were demolished – including the nearby Franciscan monastery – to make way to the fortification wanted by Frederick II, who visited the site the following year to monitor the work progress. 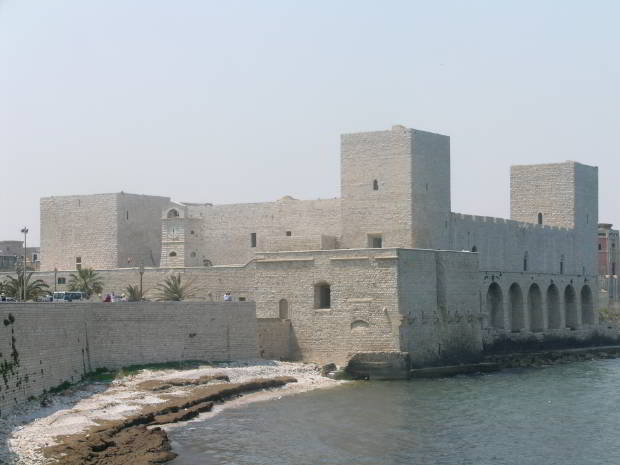 The castra exempta of the Adriatic Five years later, in 1239, the work was placed among the castra exempta —that is among the castles which depended directly on the King, but you will have to wait another 10 years before the final conclusion of the building that would serve to the Swabian to control the entire Adriatic coast and the inland streets to Barletta, Andria, Corato and Castel del Monte. In fact, even before its completion, the castle already stood out as one of the most important economic and cultural doors to the East. The Hangman’s Tower Built by the sea in local limestone of fine grain, the castle of Frederick II had a quadrangular plan with a central courtyard, fulcrum of the entire building, and four square towers on the edges that still keep today the original height of 30 meters above sea level. As with all the Swabian castles built on the coast, also this one provided access by sea through one of the towers. One of these was where Frederick II hung the son of the doge of Venice, Pietro Tiepolo, podestà of Milan, who was taken prisoner in the battle of Cortenova of 1237. Stratifications In its current configuration the castle of Trani looks like the result of three basic constructive moments, referable to the medieval foundation, the 15th century’s adaptation and the massive 16th century’s rehash. The original building, on the three sides towards the ground, is now incorporated by walls, which gave rise to three other courtyards on the east, south and west sides, corresponding to the space between the old and the new perimeter. The tower has clock dating back to 1848, when the castle was used as a prison. Swabian marks in the central courtyard Important traces of the Swabian period are found in the central courtyard which gave access to the halls of the upper floor: some shelves still in place (including those depicting Adam and Eve, the announcing Angel and announced Virgin, a dancing Caryatid, an eagle with open wings) show the existence of an original cross-cover of the corridor and close iconographic relationships with the decoration of the nearby cathedral. Images of religious tolerance Adam and Eve and the Annunciation is only apparently a religious theme: this is actually a depiction of the socio-political kind, which relates to the consistent Jewish presence in the city of Trani and to a high sense of impartial justice of the emperor against subjects of different beliefs, symbolically shown by a pattern inspired by the principle of Concordance of the Old and New Testaments. The Queen coming from the sea On 2nd June 1259 a maiden who was to become the bride of the King arrived in Trani by sea. She was only 17 years old and was called Elena, coming from Epirus and bringing Corfu and Durazzo as a dowry to King Manfredi, beloved son of Frederick II of Swabia. The sumptuous wedding took place in the castle, the whole city celebrated and paid great honour to the new Queen. The two monarchs spent seven years of great happiness, and had four children, Beatrice, Henry, Frederick and Enzo, but in 1266 the Queen experienced the bitterness of the imprisonment, following the murder of her husband in the fields of Benevento, in battle against the Angevins. The betrayal of the castellan Helena was abandoned by everyone around, except from Munaldo and Amundilla, a pair of Tranesi who helped her to take refuge, along with her two little boys, in the castle of Trani; here she waited for the right moment to return to her homeland and be safe. But before the wind was favourable, the castellan betrayed her turning her in to the Angevins and she found herself stranded in the same place where, years earlier, her happiness had begun. Angevin nuptials Lavish nuptials were celebrated in the castle also in Angevin age, like those of Charles with Margaret of Nevers, in 1268, and Prince Philip with Isabella Comneno, in 1271. There Siffridina, Countess of Caserta, was held captive, from 1268 until her death in 1279, because she had favoured the unfortunate descent of Corradino of Swabia and kept the names of the conspirators secret until the end. The only documented construction works in this period are some fireplaces, manufactured by the royal engineer Giovanni from Toul in the residential area of the castle. The Sacred Royal Hearing At the behest of the King of Spain Philip II of Habsburg, from 1586 to 1677, the Sacred Royal Hearing of Bari Province was based in Trani. In 1799, the noble Trani idealists were imprisoned and murdered there, and their bodies were thrown into the sea. In the 19th century the castle was used as a Provincial Central Prison until 1974. The nineteenth-century renovations From 1832 to 1844 and beyond the entire building underwent a renovation which significantly altered its physiognomy, which, adding bodies (offices, house of Director, women’s prison, isolation cells, carpentry, laundry) corrupted the harmony of the curtains and towers and altered the original space of the courtyards. An 18th-century wooden plastic model in the Museum Currently in the northeastern bastion is the Castle Museum, which, in addition to some of the most important ceramic and stone finds from excavations therein conducted, houses a wooden plastic model of the castle, built in the mid-eighteenth century by Giovanni Carafa, Duke of Noja. Sources: Copyright ©2002 Stefania Mola – Il Castello di Trani by Stefania Mola (published on www.stupormundi.it) www.traniweb.it www.castelloditrani.beniculturali.it La via dei canti by Angelo Lucano Larotonda

Between the East and the West Based on archaeological findings it is possible that the ancient port city of Trani had prehistoric origins, although most concrete evidences date back only to later periods, like that of the Romans. After the Roman period the city belonged to the Byzantine Empire, achieving a certain degree of prestige as a meeting point between the East and the West. Of great importance was, for example, its harbour, starting and return point of several crusades. 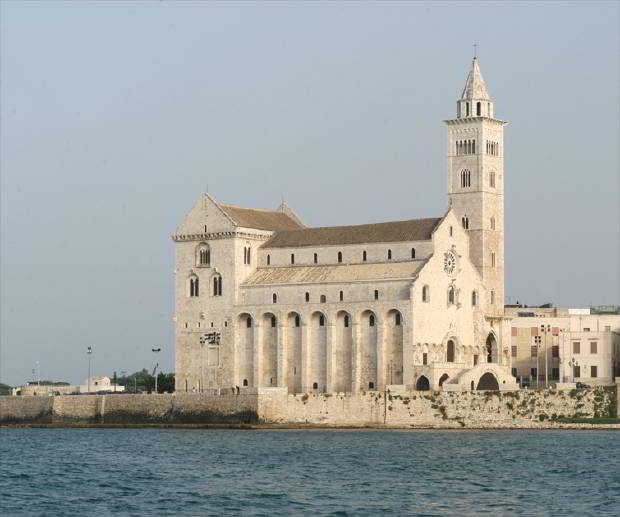 A cathedral on the sea for San Nicola Pellegrino In 1042 also the Normans arrived in Trani, and they besieged it: they were amazed by not being welcomed by the Tranesi and years later, to subdue them, they were forced to build a castle. It was during this period, corresponding to the first crusade, in 1099, that the city began working on the construction of the cathedral in honour of the Patron Saint San Nicola Pellegrino, a young Greek en route to Rome who died in Trani after several days of illness and was canonized right after to great acclaim. Ordinamenta Maris In 1063 on the orders of Peter of Trani, count of the city at that time, the Ordinamenta Maris were drawn up, which are still considered among the oldest seafaring codes. In this code are enclosed all the norms that regulated sailing, from the emoluments of the sailors to the finds at sea, a sort of Union contract that is the basis of Italian maritime law. 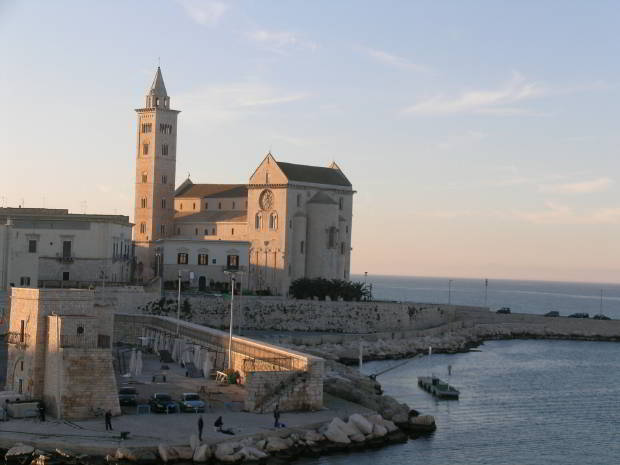 The world in Trani Some families originating in the Maritime Republics came to settle in the city, which became an internationally known place. On the other hand, the importance of Trani is evident by the presence of a Venetian consul since the 12th century and of other “representative offices” like England, Holland, and several towns north of the Alps, whose offices were located in the blocks in front of the Cathedral. The plans of the Swabian It is no coincidence, then, that Frederick II looked at this city with great attention: a very active port, with thriving agriculture, a lively and rich Jewish community, all this could help Trani to become a source of money to fund the ongoing wars of the Swabian. The impatience of the Tranesi Although highly productive, Trani’s population continued to show signs of impatience towards the German House, which is why the Emperor built a castle to keep the situation under control. Because of its strategic importance, the city enjoyed administrative privileges. After Venice, Trani Frederick II died in 1255 and his son Manfredi tamed the Tranesi siding with the Pope, who made an army of 800 knights pounce on Trani. The town, retaken by Frederick’s favourite, was by then become one of the major ports of the Adriatic. The Jewish settlement contributed to Trani’s prosperity, by boosting trade and studies, being the oldest of southern Italy at that time. In addition to the rich and thriving Jewish colony, also the Florentine merchants settled there, claiming that Trani was the most prosperous port in the Adriatic after Venice. Chieftown for 200 years The city went through a period of crisis (15th century-16th century) under the domination of the Angevins and the Aragonese, worsened by the subsequent expulsion of the Jews, who had always been a powerful economic group within its society. However, the city almost simultaneously began to take on a prestigious role in the legal field. It was in 1586 that the Sacred Royal Hearing was officially placed in the Swabian Castle and Trani officially became “chief town of the Land of Bari”, record that it held for over 200 years. Trani Cittàslow Since then the city became the residence of many illustrious names, lawyers, civil servants and judges, all of whom settled there enriching it with art treasures, precious libraries and sumptuous palaces. Trani is today a municipality member of the Cittàslow international organization, founded in Italy in favour of a slowdown of the modern and frantic dynamics and promoting a better quality of life. 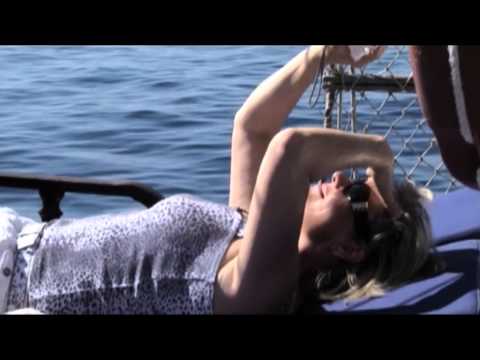 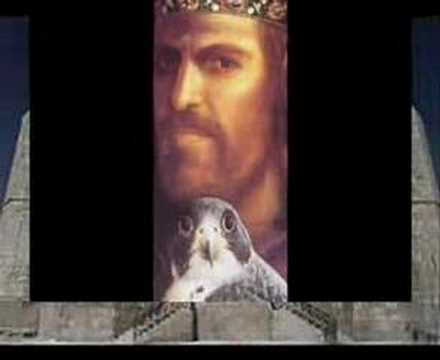